We decided this year to cross an item off our bucket list while we were still able to do it. (I'm not 100% health-wise.) With the blessings of my Doctors and a small (ish) bag of medications and a crapload of avion points and airmiles we were off!

Did it start easy - no, that's not our style. Multiple flight changes and one cancellation ensued in the weeks leading up to the trip. One great thing is one of the changes the airline made facilitated us meeting the other couple that we were traveling with here in Canada. Something that the airline previously stated was impossible.

My biggest problem was what to take for a camera. Do I take a good DSLR camera and an all around lens like and 18-105 or go with a 24-75 f2.8 or take a Nikon Coolpix with a 42x opital zoom. The weight won and I took the coolpix. In hindsite, I believe I made the right choice.

We met in Toronto and enjoyed some of the priciest food this side of a Michelin 4 diamond restaurant. $12.99 for a premade wrapped cold soggy sandwich.

The flight to Barcelona had all the comfort of a 5 man cross country road trip in a VW bug. The airline executive should all be forced by contract to only fly economy like the regular folk.

BUT we arrived safe and sound only around 8 hours later.  Barcelona, Spain is a wonderful city and very forward thinking. Their main avenue the Rambula is maybe 8 lanes wide with a 20 foot wide sidewalk on both sides. The city has closed this thoroughfare to all except bicycles and pedestrian traffic. Lots of people there shopping and enjoying the many cafes that have set up patios in the center of the road. They also have a system where you can pay a set fee at the beginning of the year and then you have the use of may thousands of bicycles that are everywhere. Borrow one here and leave it where ever you end up. They also have a "hop on hop off" bus. It is a double-decker bus that travels in a loop that includes all the sights. The price of the ticket includes unlimited trips and earphone so that you can listen to the one of 8 language running commentaries of what you are seeing.

This city has everything a person could hope for in a travel destination. Good food? got it, beaches? got it, lots of old fantastic looking churches? all over the place, museums? lots and lots, sports? mostly soccer but oh, what a team, great architecture? well Goudie was from here so yes to that as well. Cheap alcohol? A bottle of Dewars scotch was 14.99 Euro. Warm weather? high seventies every day while we were there. Would I go back? in a heartbeat. 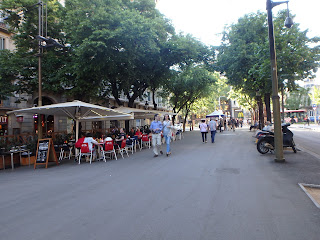 Popular posts from this blog

Wine Tasting at White Point Beach Resort Several times a year White Point Beach Resort in Nova Scotia, Canada has a "Wine Tasting" Event. The quotes are because it is not just about the wine. The most important thing is that each tasting raises funds for a worthwhile charity. The "Wine Tasting" is a bit of a misnomer. I was there in Feburary 2011 and there was also; sushi, ribs, chicken, crab, lobster, scotch, rum, beer, vodka, wiskey, coolers. You get the idea.

Chef Allen Crosby ensures that there is a favorite food for everyone and more than enough food to go around. (The last two years I had to forego supper as I didn't want to be too full to enjoy all the finger food.

The food was so good that I overheard two gentlemen discussing the merits of wearing maternity pants (the ones with the stretch panel in the front) to this event.  Chef Crosby regularly provides classes on cooking. I was able to sit in on a BBQ course where he demonstrated cooking a pizza on …
Read more